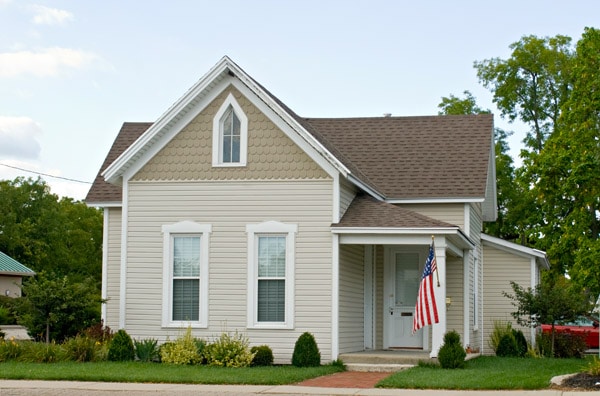 Real estate in Canton is an ever growing marketplace, with home sales and values continually rising year after year. When it comes to Canton real estate, there are few local Realtors more experienced that the experts at The Patti Mullen Group. With over thirty years of experience assisting buyers and sellers of homes in the Canton area, our real estate professionals have the experience and skills needed to ensure that your real estate transaction is a success.

With a reputation as top rated Realtors in the Canton area, The Patti Mullen Group has over three decades of success across Southeast Michigan and the Metro-Detroit Area. We do not stop working until our clients are satisfied, which is clearly shown by the many glowing reviews compiled over the years. If you are looking to purchase or sell your Canton home, please contact our expert Realtors or continue to learn more about the Canton area below.

Buying a Home in Canton

Canton is one of the top areas in the Metro-Detroit area for middle class families and individuals to settle down. The area and its sister community, Plymouth Township, offer some of the best homes and general amenities of the entire metropolitan area. Real estate here is competitive, with homes normally seeing multiple offers during the buying process. This is largely due to the areas relative affordability, quality school district and proximity to a wide variety of good employment opportunities.

Just an 8 mile drive from both Detroit and Ann Arbor, Canton’s central location makes it easy to enjoy the full extent of what the Metro Detroit and Ann Arbor areas have to offer. This includes things such as a great State Park and Metropark system, as well as nearly endless entertainment and dining options. Community safety is important in Canton, with one of the best public safety departments in the state. Sharing its school district with its neighbor to the north, Plymouth, Canton has some of the best schools in Southeastern Michigan.

Home prices in Canton currently average $310,000 and have seen over a 10% increase in value over the past year, backed up by nearly a decade of solid growth. This growth in home values is predicted to continue well into the future, making Canton one of the best areas to purchase a home not only due its amenities but also due to the solid equity that can be gained from real estate in the area.

If you are interested in purchasing a home in the Canton area, it is important that you have an expert realtor on your side to ensure you secure the home of your dreams for the best price possible. Our team of real estate professionals has over three decades of experience assisting buyers in finding their Canton dream home, resulting in many happy Canton homeowners.

Selling a Home in Canton MI 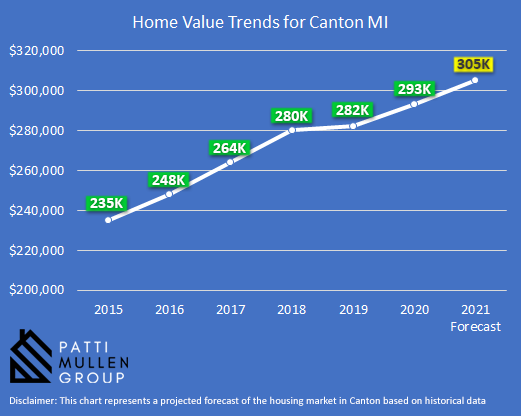 Canton is a strong sellers market when compared to the rest of the Metro-Detroit area, resulting in ever increasing home values due to high demand. This puts Canton homeowners who are thinking about selling in a strong position to take advantage of their homes equity, which has seen an increase of over 10% over the past year. Like its neighboring sister community of Plymouth to the north, Canton is seeing an explosion in popularity and growth, with a limited supply of available homes. This has produced a record sellers market, making now one of the best times to cash in.

While selling a home in Canton is not difficult compared to other markets, it is important to have a solid selling strategy in order to maximize a home’s value during the sale. There are multiple factors that come into play when listing a home, setting the appropriate price, and choosing the best offer. At The Patti Mullen Group, we specialize in selling homes in Canton and the surrounding areas, with a successful track record of over thirty years. If you are looking to sell your home for the best price possible, our team experienced real estate agents can help.

*Please note, the statistics listed above are based on data obtained from Zillow. While we try to keep these numbers as updated as possible, these are estimates and may not always reflect the actual numbers.

When searching for a new home, the quality of the schools in that community are often an important deciding factor in the decision. Fortunately Canton has some of the better school districts in the state. Schools in Canton are divided among three primary school districts: Plymouth-Canton Community Schools, Wayne-Westland Community Schools and Van Buren Public Schools. The majority of the township is served by the Plymouth-Canton district in the north. The rest of the township is served by the Wayne-Westland district in the southeast, and Van Buren Public Schools in the southwest.

Canton, known formally as the Charter Township of Canton, is populus and thriving community in the Detroit Metropolitan Area. Spanning 36.14 square miles, Canton is Michigan’s second most populous township with over 90,000 residents. As of 2015, the city is ranked the 29th safest community in the United States and is ranked as the 96th highest-income municipality in the United States with a population of over 50,000.

Canton is centered amongst several vibrant communities that allow for easy access to recreation, entertainment and the ability to enjoy all the experiences the Metro Detroit area has to offer. Downtown Detroit is a 35 minute drive from Canton, which offers a wide array of entertainment and dining. Ann Arbor, a major cultural center of Southeast Michigan, is 25 minutes down the road from Canton. Its proximity to both of these major cities also makes commuting for work and business expedient.

Canton is known throughout the area for their excellent farmers market that takes place from May to October every year. Also, Canton holds the annual Liberty Fest which is a great family friendly event complete with a car show, plenty of eats, carnival rides and fireworks. Directly to the north, Plymouth holds multiple festivals every year including the summer art festival, fall festival and winter ice festival which many residents of Canton and nearby communities take part in.3

For those interested in recreation, Canton is located in the immediate vicinity of multiple state, county and local parks. These include Maybury State Park, Island Lake Recreation Area, Kensington Metropark, Huron Meadows Metropark, Barchester Park, Heritage Park and many others. Maybury State Park offers horseback riding for those interested and Kensington Metropark boasts one of the best golf courses in the state. For the avid golfer, there are a variety of additional golf courses located in the Canton area, including Hickory Creek Golf Course, Pheasant Run Golf Club, and Fellows Creek Golf Course.

For the benefit of buyers, sellers, or other interested parties, we’ve prepared several local real estate resources for the City of Canton, MI. This includes additional information on the school system, property taxes, and city ordinances. This information can be found within the links below.