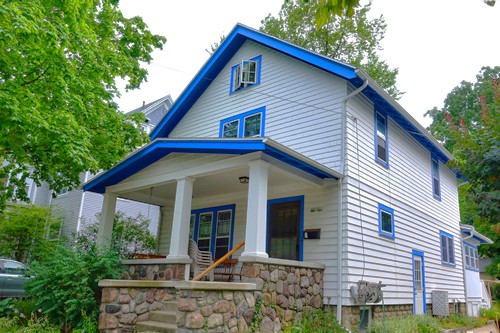 As top rated Realtors in the Detroit Metropolitan Area, there are few Realtors who are more knowledgeable with more expertise in the ever increasingly popular Livonia real estate marketplace. Our 30+ years experience and skills in assisting people purchase or sell their Livonia homes can be put to use to ensure that your next real estate transaction is a success.

The Patti Mullen Group has worked hard for the past three decades to build its reputation and following in the Southeast Michigan real estate marketplace, with a long list of satisfied clients. If you’re looking for a Livonia realtor, please contact us today to speak with one of our real estate experts.
— Directory —Livonia Realtor Reviews
Selling in Livonia
Local School Guide
Livonia Neighborhoods and Subdivisions
About The Area
Community Resources

Carol is very, professional with real estate and she is dedicated to her customer !!!!! She keeps you informed about everything involved with the sale of the home.

Carol was a great realtor for my husband and I. She knew what we were looking for in a new home and was able to give us solid and educated advice on our options. I had never sold a home before, and Carol made it easy to understand and was very quick to answer all of my *many* questions! I would refer Carol to anyone looking for a home, she is a great professional while being prompt and personal. Thank you Carol!

Bought and sold a Single Family home in 2017 in Livonia, MI., Zillow Review

My wife and I purchased a new home in 2011 and Carol was our realtor back then. She helped us find the perfect home. Six years later, our family tree is growing and we need something bigger. We turned back to Carol to sell our home. It was on the market for only four days! Highly recommend Carol and her office.

I have used Patti’s services on multiple occasions, for both my own home as well as a home I had to sell while acting as a personal representative of a recently passed close friend. Patti is professional, knowledgeable and lightning fast with any requests or follow-up actions. There is nobody else I would use for my realty needs.

Sold a Condo home in 2016 in Livonia, MI, Zillow Review

Buying a Home in Livonia

Livonia is not only one of the most popular places to live in Michigan, it is one of the most popular places in the United States for young people to purchase a home. In fact, it was named by Realtor.com as the 6th hottest real estate market for millennial buyers both 2018 and 2019. The stable and safe community, as well as reasonable housing prices and relatively low taxes make Livonia one of the best suburbs in the Metro Detroit area for raising a family. It also boasts easy access to a wide range of employment opportunities due to its physical location in the northwest corner of Wayne county.

With a population of just under 100,000 residents spread across approximately 35.85 square miles, Livonia is one of the larger suburbs in the metro area. Livonia is bordered to the east by Redford Twp, the south by the City of Westland, the north by Farmington Hills and the west by Northville & Plymouth. Its central location within the metropolitan area makes it highly desirable to middle class residents due to its proximity to employment, shopping and entertainment.

As Zillow Premier rated Realtors, The Patti Mullen Group will work with individuals to navigate the Livonia real estate market’s wide range of options in order to find their dream home regardless of their budget. Our strong track record of success and positive client reviews speaks for itself in terms of our expertise helping buyers in the highly competitive Livonia real estate marketplace.

Selling a Home in Livonia 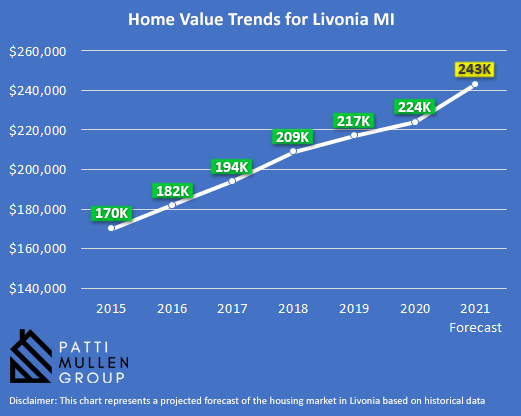 For those looking to sell their Livonia home, there has never been a better time. As mentioned previously, Livonia is one of the hottest real estate markets in Michigan as well as the entire country. Livonia has seen an exceptionally high appreciate rate of well over 42% over the past ten years, nearly doubling homeowner equity. Compared to the national average annual appreciation rate of approximately 3-5%, this speaks volumes as to how desirable the Livonia area has become. This desirability makes Livonia a sellers market, allowing homeowners who may have been considering moving the ability to cash in on their home’s peak equity.

Combined with a high quality school system, and a well policed and safe community, Livonia homes are one of the hottest real estate commodities in the state and can easily attract top dollar buyers with the right selling strategy. Our Realtors have a deep knowledge of this community and extensive experience on both sides of the home buying process. If you’re looking to sell your home in Livonia, the Michigan Realtors at the Patti Mullen Group can streamline this process and maximize the value of your sale.

In addition to the city’s excellent public schools, Livonia families also have access to charter, private academies and religious schools. For those interested in private institutions, Livonia Montessori School, Brightmont Academy and New Morning School are all within the general area. In addition to this, Livonia also is located in an area with a high concentration of religious schools. Some of the most well known of these are St. Edith and St. Michael’s Catholic Elementary Schools, as well as St. Paul’s Lutheran School, Plymouth Christian Academy, and St. Michael Catholic School.

For more information on schools in Livonia check out our comprehensive guide on school systems in the Metro Detroit area.

The City of Livonia is consistently ranked among the safest cities in the country year after year, which makes it an excellent place to raise a family. Livonia made the list of the 25 Safest US Cities in 2019 and also placed in the National Council for Home Safety and Security’s top 100 Best Cities in the country in which to Raise Kids in 2017. This is largely due to an outstanding police force in combination with the city’s educational system and youth programs.

Most residents in Livonia live in 3-4 bedroom single-family brick homes. These high quality homes have been well maintained over the years and most are original, a testament to their build quality and construction. The majority of Livonia homes were built after WWII with the help of the GI bill and stand as a testament to the years that became known as the American Century.

With an average income of approximately 38,000 across its population of nearly 100,000 residents, Livonia is considered a solid middle class city. Popular with retirees and young families, the city offers an excellent atmosphere for individuals who want a safe and friendly community with a wide selection of high quality homes. It is these factors combined with its nearly perfect location within the metropolitan area that makes Livonia one of the hottest real estate markets in the United States.

For those looking to learn more about the Livonia area community, below are several links which provide more information on the City of Livonia and the surrounding area.